The Return of Sherlock Holmes: Volume One 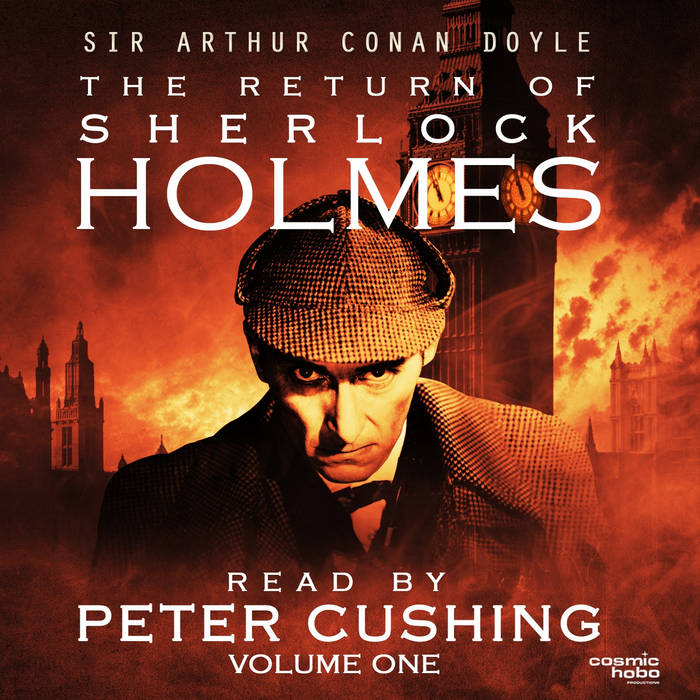 "This CD contains four of Doyle's best loved Holmes stories: The Empty House, The Norwood Builder, The Dancing Men and The Solitary Cyclist. These were originally recorded in 1971 as part of an entire reading of all the 13 stories of this collection for the Royal National Institute of Blind People's (RNIB) Talking Book service.

Up till now, they have never been made commercially available in any form and were only made accessible to registered members of the RNIB. As such, they have become somewhat of a Holy Grail for Cushing fans and Holmes aficionados. Cosmic Hobo deserves the highest praise, simply for finally making them available to a wider audience 40 years after they were originally recorded.

Choosing Peter Cushing as the narrator was a stroke of genius from RNIB's side, as the actor was not just a genuine Sherlockian, but had also made quite an impact with his portrayal of the detective in Hammer's version of The Hound Of The Baskervilles (1958), followed by 16 episodes of the BBC series, in which he took over from Douglas Wilmer. In that TV series, he had also already interpreted some of the stories he would later record for the RNIB.

Following these audio recordings, he once more played an elderly Holmes in The Masks Of Death (1984), and even played Sir Arthur Conan Doyle himself for a US TV movie in 1976 about The Great Houdini. So, you can bet that he was the right man to narrate those stories.

For his Holmes and Watson, Cushing mainly relied on his own natural speech, as usual, an utter delight to listen to with his rolling Rs, clipped voice and gentlemanly pronunciation. Amazing that he was once asked to get elocution lessons.

For some of the other supporting characters of both sexes, however, he also changes his vocal approach and dialect, displaying his wide and distinct acting range. In one case, he even seems to have taken a glimpse into the future and channelled Billy Connolly.

All in all, this is an excellent audio collection, clocking in at close to four hours. I am anxiously looking forward to seeing the remaining stories published by Cosmic Hobo in the near future." DEN OF GEEK