The Scarifyers: For King and Country 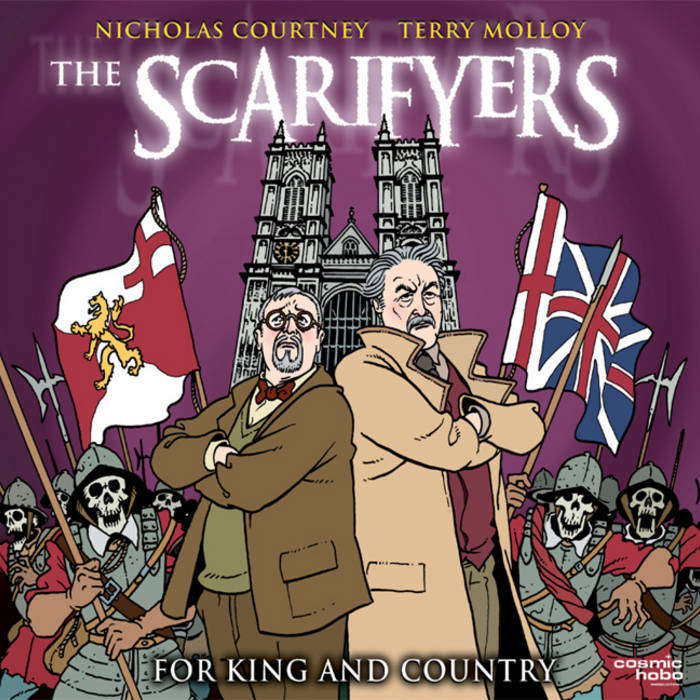 turnip I love the Borley Rectory scene...it's briliant (poor nun!)....but in fact, this IS my is my favorite Scarifyers-episode. Favorite track: Borley Rectory.

Chris Clifton The third installment of the Scarifyers. Londoners are being killed at the hands of their own household appliances... who ya gonna call? Dunning and Lionheart of course. If zombies and the walking dead are your thing then don't miss this latest supernatural adventure from Dunning and Lionheart. Favorite track: Borley Rectory.

"Sir" Harry Price, self-proclaimed Ghost Detective, has built a machine. His previous experiment - to turn a goat into a man - may have ended ignominiously, but now Harry plans to capture the spirits of the dead with his Price Ghost Captivator. If he can make it work, that is.Meanwhile, Londoners are being killed, in especially gruesome fashion, with their own electrical appliances.

But most puzzling of all is the Faraday Murderer's habit of leaving cryptic messages in 17th century English at the scene - messages that mention a certain Harry Price...

Age-old forces are stirring... The dead will rise... the Crown will fall. Can Lionheart and Dunning save King and Country?


“Set in ‘30s England, The Scarifyers combines X-Files weirdness with The Goodies’ broad comedy…. The story is the kind it would be a shame to spoil, but it involves giggling skeletons, the English Civil War, a warped milkman cameo straight out of The Mary Whitehouse Experience, and a villain voiced by Gabriel Woolf, Sutekh from classic Who’s Pyramids of Mars… The cast, crew and writers make it fun and funny. The climax – a cinematic bit of swashbuckling in Westminster Abbey – is especially good. An amusement for Who fans and outsiders alike.”
SFX magazine

“The Scarifyers: For King and Country is… another rip-roaring slice of entertaining nonsense. For those of you unfamiliar with the series it is very much a tongue-in-cheek affair - a loving homage to the lost days of innocent boys own stories. The heroes have stiff upper lips and the villains are evil through and through... The jokes come quick and the pace of the story is suitably cracking… If you have a sense of humour, enjoy a jolly good adventure, or just know quality when you hear it, then do yourself a favour and get this latest installment of a most excellent series.”
Sci-fi Online

“The third installment of Cosmic Hobo's audio drama The Scarifyers is set in 1937 just before the coronation of George VI. Charlatan, Sir Harry Price, re-awakens ghosts from the English Civil War with terrifying consequences. This cleverly-plotted story features amongst others Oliver Cromwell, Witchfinder General Matthew Hopkins, the Archbishop of Canterbury and pioneering BBC reporter Leslie Mitchell… It's a tribute to Cosmic Hobo that they've put together such an entertaining product with such high production values.”
Den of Geek magazine