The Scarifyers: The Curse of the Black Comet 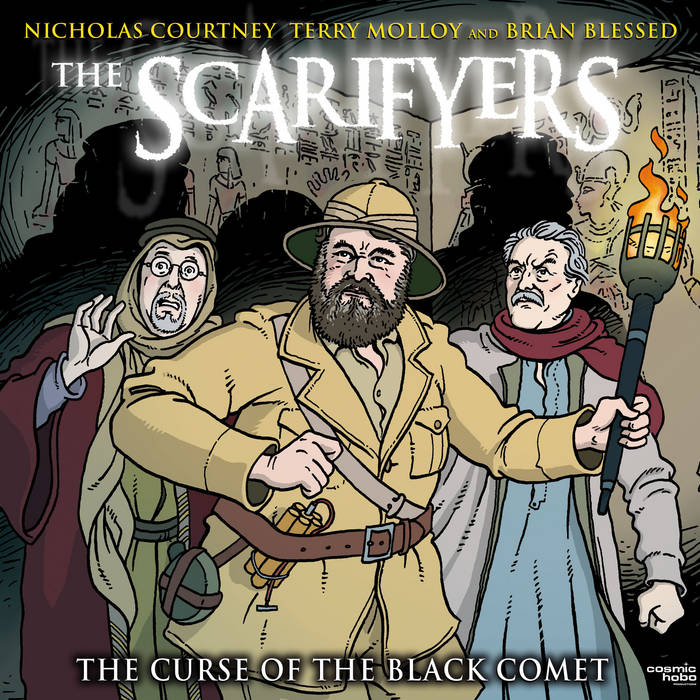 Chris Clifton Installment four of the Scarifyers. Dunning (Terry Molloy) and Lionheart (Nicholas Courtenay) trek the globe in the latest adventure "The Curse of the Black Comet". London to Egypt via the Scottish Highlands to uncover the mysteries behind the death of intrepid explorer Sir Basil Champion (Brian Blessed). Favorite track: Nefertiti's Tomb, 1923.

Sir Basil Champion (Brian Blessed) is the world's worst explorer. In a career that has seen him lost in the Kalahari, captured by pygmies, and held captive for two-and-a-half years in a pit of rabid guinea fowl, it seems his luck can get no worse - until he is eaten by a rhinoceros.

Some weeks after his unlikely demise, MI-13 is called upon to investigate a mysterious outbreak of the Black Death - at a Chelsea solicitor's during the reading of Sir Basil's will...

Has Sir Basil's legendary bad luck reached out from beyond the grave, or is there a more sinister explanation? And what is the connection with his ill-fated Egyptian expedition fourteen years earlier?

Lionheart (Nicholas Courtney) and Dunning (Terry Molloy) must journey from London to the highlands of Scotland and the lost tombs of Egypt, to uncover the truth behind Champion's death... and the Curse of the Black Comet.

"This is a first-class romp... The story rattles along at a high octane pace as Lionheart and Dunning travel in various modes of transport across the world to discover the truth about Sir Basil Champion's unlikely demise.

Nicholas Courtney and Terry Molloy (familiar as Doctor Who's Brigadier and Davros) are now well-established as the no-nonsense Lionheart and timid academic Dunning. Both clearly enjoy playing their respective characters and manage to hold their own against the mighty Brian Blessed, in itself no mean feat.

The sound design is top notch giving one a sense of being part of the action, whether in an Egyptian tomb or a Scottish castle or out at sea. Without a doubt, this is one of the best Scarifyers stories yet." DEN OF GEEK