The Scarifyers: The Horror of Loch Ness 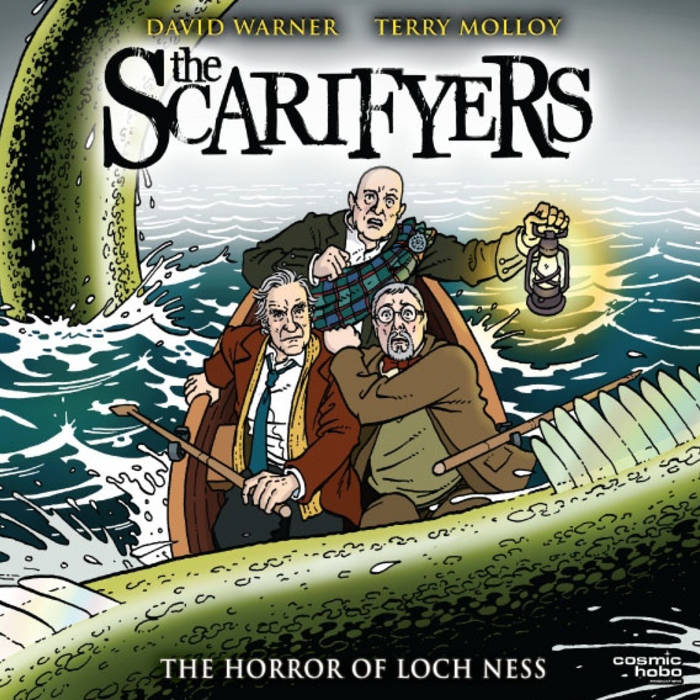 Insidious creations time travel, dinosaurs and necromancers with diabolical plans to sumon the namless beast himself!

“So the long wait is finally over with the release of the seventh The Scarifyers audio play. Fans of the stories will be celebrating in the streets as we speak, I kid you not.

The series had gone through its own evolution. Originally Professor Dunning was partnered by DI Lionheart as played by the late Nicholas Courtney. With his passing Dunning got a new partner, the most excellent David Warner, who has as memorable and resonant voice as Courtney. From the previous adventure he has settled quickly in to become one of the family.

There are few enough plaudits which can be thrown at this series. Pitch perfect in its humour, production values and vocal acting, every new release feels like coming home to an old friend.” 10/10 SCI-FI ONLINE

“Guest starring Philip Madoc in what was to sadly prove to be his final role, The Horror of Loch Ness shows that The Scarifyers has lost none of its edge with the replacement of Nick Courtney by David Warner. The return of David Benson’s Aleister Crowley will please his many fans, and the byplay between Warner, Terry Molloy’s Edward Dunning and Benson is one of the many high spots of the piece.

Unsurprisingly, given the production team’s love of Doctor Who, there are more than a few references to Philip Madoc’s most famous role in the show – in fact, it could almost have been subtitled “Solon and Thanks For All the Fish!” Who fans will enjoy some of the scenes on the second disc on more than just one level, while any fans of classic SF films will find themselves mouthing along with certain lines once Campbell and Dunning start to work on getting out from their predicament.” SCI-FI BULLETIN

“Philip Madoc was an actor known to millions, but is perhaps best remembered as the U-boat captain held prisoner by the Walmington-on-Sea platoon of the Home Guard in Dad’s Army. Madoc died earlier this year, but next week there’s a chance to hear him in his last ever role, with the release of the seventh Scarifyers adventure on CD.

Described by the Radio Times as ‘rollicking good fun’, The Horror Of Loch Ness is a must for all fans of good old-fashioned radio adventure series like Dick Barton Special Agent. Just remember, this one has its tongue stuck firmly in its cheek. A fitting farewell to one of the great character actors of his generation.” EDINBURGH EVENING NEWS