The Scarifyers: The Secret Weapon of Doom 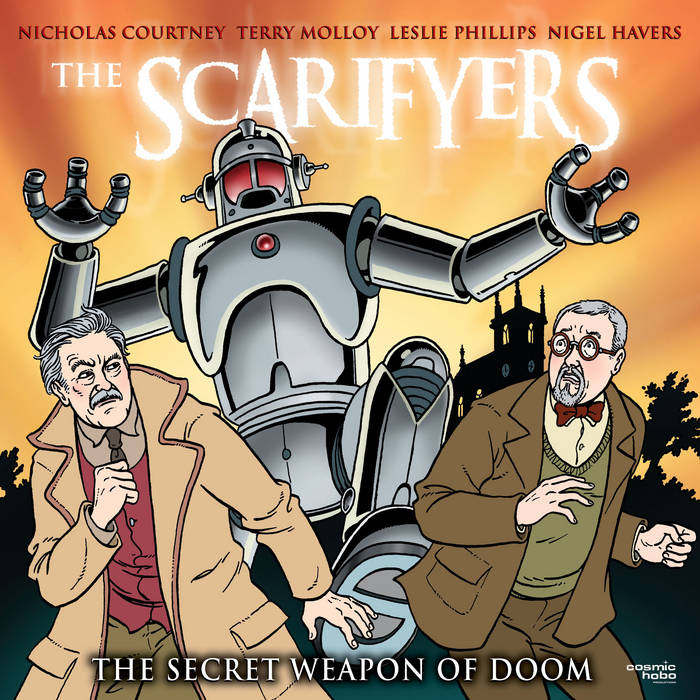 Chris Clifton Adventure number five of the Scarifyers. In this episode Lionheart is forced to team up with Victor Bright of MI13 to investigate the disappearance of a "super weapon"... Meanwhile an incapacitated Dunning turns back to his literary life but finds the absence of his good friend Lionheart a little hard to bare. Favorite track: Jimmy the Spiv.

After an unfortunate bathchair accident, Professor Dunning (Terry Molloy) is temporarily invalided out of the Secret Service. But returning to his first love, writing, proves more perilous than expected.

Meanwhile, unhinged MI-13 chief Colonel Black (Leslie Phillips) has a new case for Lionheart (Nicholas Courtney). Partnered with top spy - and housewives favourite - Victor Bright (Nigel Havers), Lionheart investigates the disappearance of a fabled super weapon - and discovers they aren't the only ones searching for it...

Death stalks our heroes at every turn. Lionheart and Dunning must fight for their lives as dark forces gather around the mysterious Secret Weapon of Doom...

"The Scarifyers are back in The Secret Weapon of Doom, with Nicholas Courtney’s Lionheart teamed up with Nigel Havers’ suave but not very bright agent Victor Bright, while Terry Molloy’s Dunning encounters a prototype of the Viewers and Listeners Association. Terrible jokes and scattergun homages to crime and fantasy fiction make this a highly entertaining listen. Well worth catching."
Total Sci-Fi Online